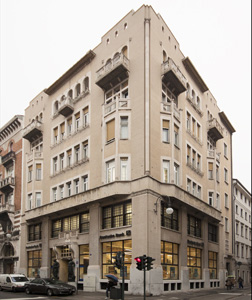 The project of the bank of Praga (then American Bank, Banca d’Italia and from the 90’s Deutsche Bank) by Josip Costaperaria and Osvaldo Poliva, is a clear example of rationalism characterized by solid and compact volumes.
The inferior area base of the bank offices presents big windows with metal chessboard frames, while the superior area used as houses presents a series of rectangular windows and provided with centering with stone frame, erker just pronounced, culminating with polygonal terrace surmounted by balconies, central series of five windows, anthropomorphic decorations strongly stylized top floor. Lastly, white marble with pilasters supporting the architrave adorned with liberty patterns, contrasting with the two bronzed figures (the Job and the Industry), with unbridled realism at the sides realize a monumental main entrance.

Where: via San Giorgio, 5

Realized by the architect Eugenio Geiringer in 1903, for the cavalier Giuseppe Basevi, famous exponent of the entrepreneurs of the city. The building fore ground had the offices of the society of commissions of the customer and the upper floors where used for residential purpose.
The building qualified example of city Liberty, presents a façade with an articulate decoration made by phytomorphic friezes and flower garlands, medallions and flute pilasters. The angle bow windows are profiled by an intertwining of laurel leaves, the balconies and the small entrance gate present in the irons a linear graphism as the modernist tradition wants.

Where: via Dante Alighieri, 6

The building represents one of the best modernist evidence of Romeo Despoli. The building, perceived as unity, is in reality composed by three different buildings. The central part is slightly sunken compared as for the laterals. The continuous alternate of elements sunken or projecting, columns and terraces, decorative pilasters and structural pilasters creates a game of chiaroscuros that animate the façade. The superabundant plastic richness of the ornamental patterns characterizes an example of vibrating liberty. The ground floor and mezzanine, highlighting the clear derivation from Fabiani. Ground floor two angular balconies handle further the facades. The windows at the third floor, with round arch, are completed by a balcony with a railing wrought iron flower patterns. The building culminates with a perimetral hanging loggia and with a projecting ledge.

Built in 1913, it is a work by the architect Giorgio Polli, who invented a kind of building functional and aesthetically acceptable. The mediation between the different requirements seemed to be possible in the model of the basilica, that reconverts thus to its profane original market function.
The three big aisles consented all that a shop of big dimension need, while the structures reinforced concrete permitted to lighten the perimeter walls and interrupt them with big windows. The pronaos was destined to host the fish auctions, while the bell tower hid the tink of the water of the sea that had to be “lifted up” for serving to the delivery counters, while the interior is an example of functional purism. The cement pilasters support the covering. [http://salonedeglincanti.comune.trieste.it]

Max Fabiani (1906) careful in this project to the most decorative effects of the Liberty that solves  aesthetically recurring to the beautiful ornamentation leaves cascade between the windows and to the elegant development of the balconies in façade. While calibrated setting of the interior space and in the disposition as “megastore”, realized in the inferior floors, reveals clearly that he focused on functionalist concepts, of the house Portois and Fix of Vienna. Beyond this, in the singular asymmetric disposition of doors and windows ground floor and mezzanine of the façade, shows an interest for the solutions proposed by the Japanese architecture that is singular reflex of the most avant-garde architectonic theories of the time.

Mr. Ernesto de Stabile commits the project to Max Fabiani for the realization of a four floor building, fore ground and basements. The owner has the top floor as manor, and destines the first floor to a Viennese cafè. De Stabile requests to the architect also the realization on the erker façade that permits to see from his house his yacht berthed at the Yacht Club Adriaco. The façade thus presents on the corner between river Grumula and Belpoggio street an erker quite projecting. The renaissance ashlar that covers the ground floor and at different heights the ground floor, rectangular filled stucco decorated with leaves pattern over the windows of the second and third floor, from the roof going down drainpipes, intended as decorative elements all typical of the architecture of Max Fabiani. 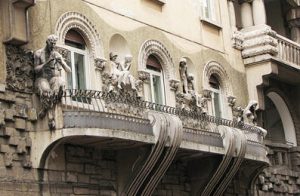 Synthesis of the two souls of the architect Giorgio Zaninovich. Six floor building with a polygonal plan, the central part projecting completely smooth presents long and narrow windows without any decorations. The lateral wings rearward compared to the central part are instead characterized from the second floor, with balcony with stone balustrade with very elaborated decorations, with monumental bulging and fluted triple order capitals degrading on squat columns adorned with anthropomorphic figures. The ground floor is characterized by an ashlar rustic cover, while the first floor two big consoles support a balcony with three small arch windows, decorated with stone, oriental inspiration as also the decorations of the two lateral balconies with capitals and acanthus leaves. 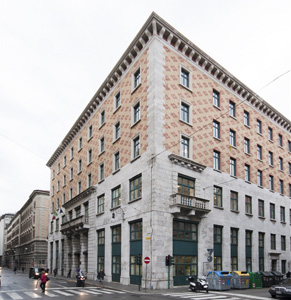 The first multipurpose structure realized in Europe, the Balkan hotel (Narodni Dom) born as a big community centre where is concentrated the economic, social, cultural, artistic and sporting life of the Slovenian minority in 1904. Max Fabiani realizes in this building the synthesis of its knowledge for a functional architecture, practical and concrete. Great rationality and functionality in the distribution of the internal spaces: a restaurant, boardrooms, a gym, a theatre. a print shop, the Cassa di Risparmio, the Mutua and locals destined to cultural life. Upper floors there was also an hotel with 24 rooms and 12 apartments. The external simple and essential. The monumental entrance secession style was adorned with windows realized by Koloman Moser. In 1920 the building burnt and was destroyed by the Fascist squads. Now it is the base of the Superior School of modern languages. 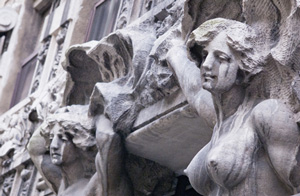 Opened on Christmas day of 1907. Considered immediately as a work worthy of all expectations for the modernity of the general setting and for the elegance and accuracy of the details. The palace by the architects Viviani-Ghiberti born as amateur dramatic theatre the big hall was articulated with two galleries, a stalls and a big stage. The majesty of the building is underlined by the impressive female statues located on the pilasters at the entrance, realized by the sculptor Romeo Rahtmann (then he will realize also those of the Polacco House in Corso Italia). In the façade pilasters and the stone architraves decorated with flower patterns mark the square and rectangular openings of the windows.

Where:  via Giulio Cesare, 1

The first station of Saint Andrei built in 1887, (architect Seeling) is a beautiful example of liberty style. The building, structurally moved, presents a central part in more levels and more connected corps. The facades typically liberty, present big windows interrupted by an iron shelter with rich elaborations, the decoration even if austere, presents floral elements. In 1906 the station became thus a terminus belonging to the national railways as the lines, the new station had 24 platforms, a passenger shelter served by four ordinary gauge platforms and one narrow gauge platform, a goods yard with two large warehouses served by covered tracks. Bud from the first postwar period, even if it was a very capable yard, and for that time, modern equipped, the importance of Trieste Saint Andrew diminished until it was decommissioned. Today it houses the Railway Museum.