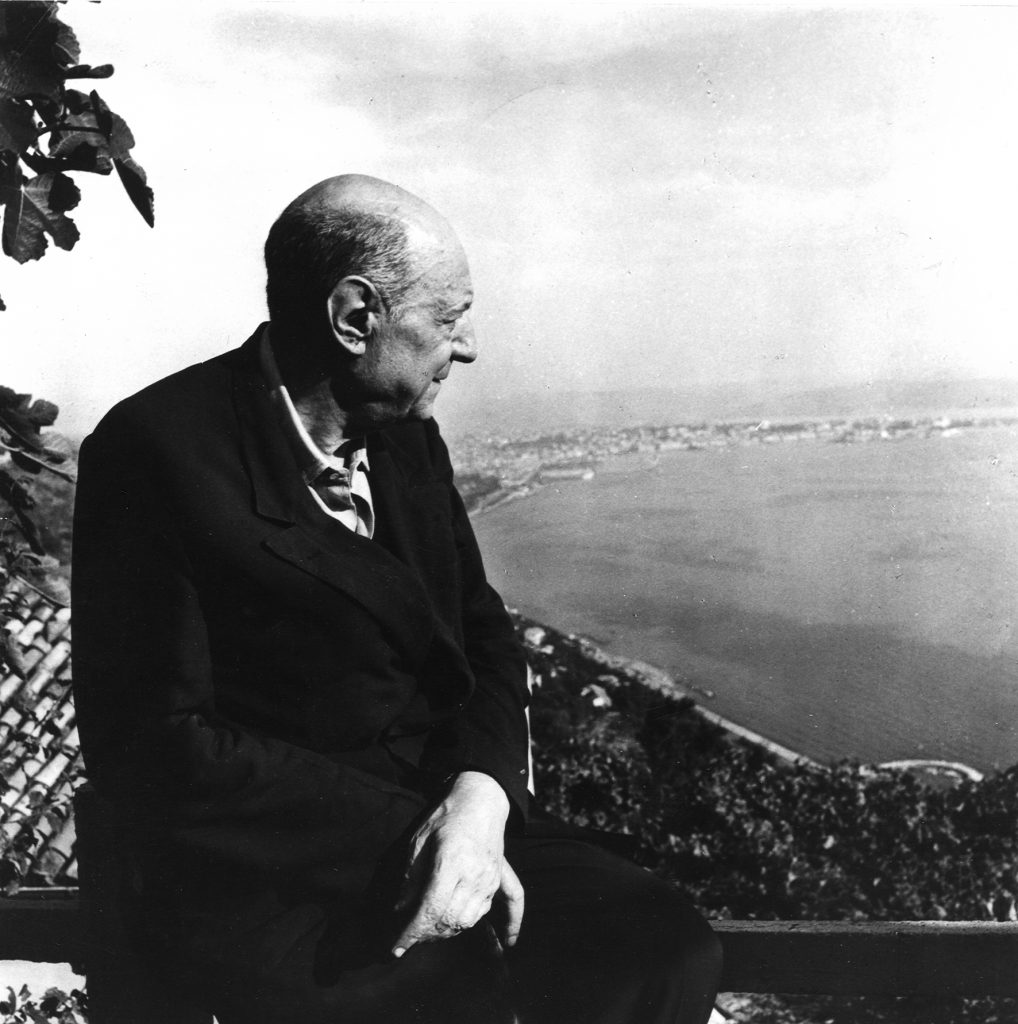 Umberto Saba was born Umberto Poli on 9 March 1883 in the old Jewish ghetto of Trieste. His father, Ugo Poli, was born in Trieste in 1853 but his own parents were from Montereale Valcellina in Friuli. Saba’s mother, Rachele Felicita Coen, was a Jew born in Trieste.

Ugo left his family and fled to Italy for his involvement in the irredentist movement seven months after the wedding, right before his son was born. Saba started writing poetry as an adolescent and his early production is found in the first part of the Canzoniere (Songbook) titled Poesie dell’adolescenza e giovanili (Poems of adolescence and youth), 1900-1907. After discontinuing his studies he was taken on by a small company.
In 1903 he enrolled at the University of Pisa. It was around this time that the early symptoms of neurasthenia appeared – a condition that will lead him to contemplate suicide and for which he would be repeatedly hospitalized and treated throughout his life. Saba was born on Austrian soil but he was an Italian citizen. As such in 1907 he served in the military in Salerno, an experience that inspired his Versi Militari (Military Verses). After returning to Trieste in 1909 he married Carolina (Lina) Wölfler who, one year, later gave birth to his only daughter Linuccia. In 1912 he moved to Bologna with his wife when they reconciled after serious marital problems. He collaborated with the daily “Il resto del Carlino” and wrote the collection of poems La serena disperazione (Serene Desperation).

He then moved briefly to Milan, where he worked as secretary for a cabaret theater. During the First World War he worked behind the frontlines in several administrative posts, an experience that inspired his Nuovi versi militari (New Military Verses). When he returned to his hometown, he took over a second-hand bookshop that he renamed “Libreria antica e moderna” (Ancient and Modern Bookshop) to which he would devote most of his life together with his poetry. At that time he self-published a limited edition of the collection of his poetry and in 1921 the first version of his acclaimed Songbook appeared in print: it brought together his entire production and the collection would be further enriched throughout his life. The first, invaluable manuscript known as Il Canzoniere dated 1919 is preserved at the Civic Library of Trieste. Between 1938 and 1945 the anti-Jewish laws forced him to leave Trieste and to find shelter first in Paris and then in Rome (at Ungaretti’s home), Florence (where he also lived at Montale’s) and Milan. In 1945 the second edition of Songbook was published by Einaudi (to be followed by other expanded and revised editions), followed a year later by his prose works Scorciatoie e raccontini (Shortcuts and Small Tales).

His prose production also includes Ricordi – Racconti, Storia e cronistoria del Canzoniere (Recollections, History and Chronicle of the Songbook) and the unfinished novel Ernesto. Saba died of a stroke on 25 August 1957 in the same hospital in Gorizia where he had been admitted on the day when his wife died, 26 November 1956. 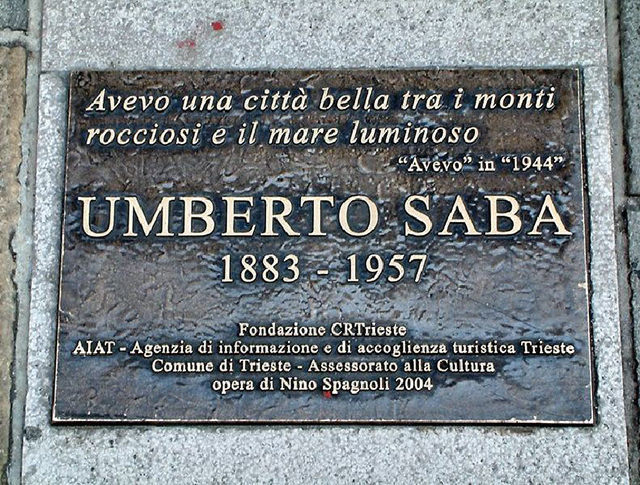 Via di Riborgo, 25
No longer in place; today corresponds approx. to via del Teatro Romano 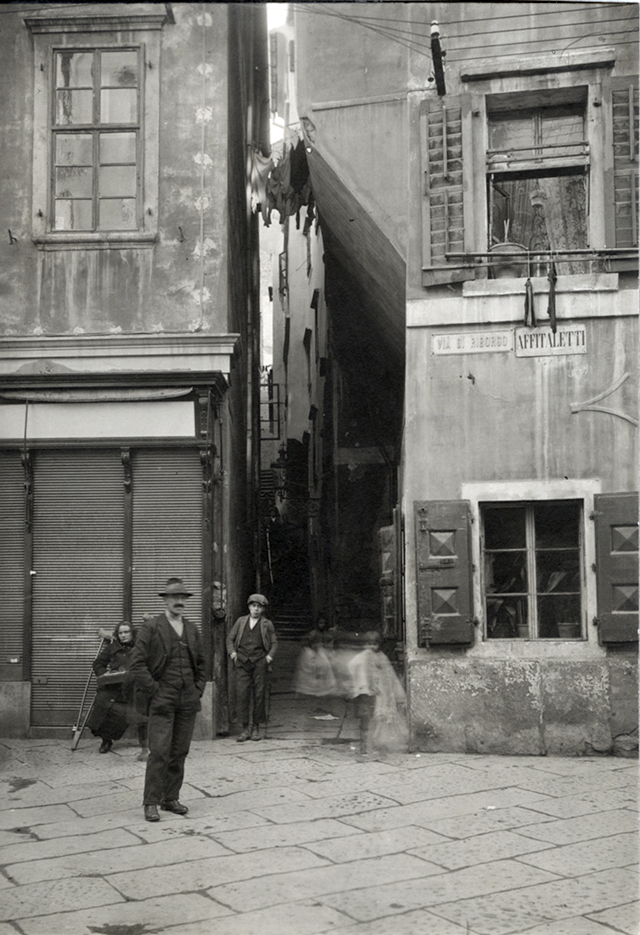 Via di Riborgo started from piazzetta San Giacomo (no longer in place) facing via del Corso (today Corso Italia) and ran through the Jewish ghetto, across fetid streets and run-down buildings with no plumbing and common toilet facilities. Between 1934 and 1938, the fascist regime forced the inhabitants of the ghetto out of their homes and hundreds of buildings were brought down, including Saba’s birthplace. Via di Riborgo was replaced by Corso del Littorio, today via del Teatro Romano.

When I was born my mother wept over it,
alone at night in her empty bed.
For me and for her, being destroyed by grief as she was,
her dear relatives were buying and selling in the ghetto. 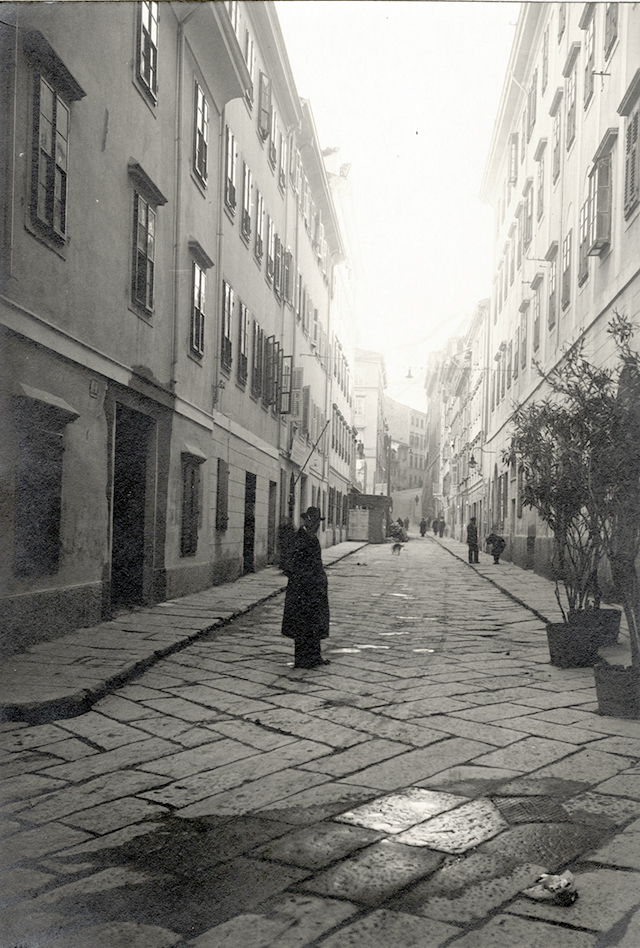 For the first three years of his life Saba was raised by a Slovenian wet nurse, Peppa Gabrovich, who was a Catholic peasant.
Some poems from Il Piccolo Berto (Little Berto) refer to Saba’s pain when his mother suddenly dismissed the nurse, allegedly because she was jealous and because the nurse had tried to raise the baby as a Catholic.

The house of my wet-nurse sits
quietly facing the old Chapel,
and from a hillside where goats love to browse
it gazes down and looks pensive.

Piazzetta San Giacomo, 1
No longer in place, it opened on the corner between via di Riborgo and corso Italia, approx. corresponding today with largo Riborgo 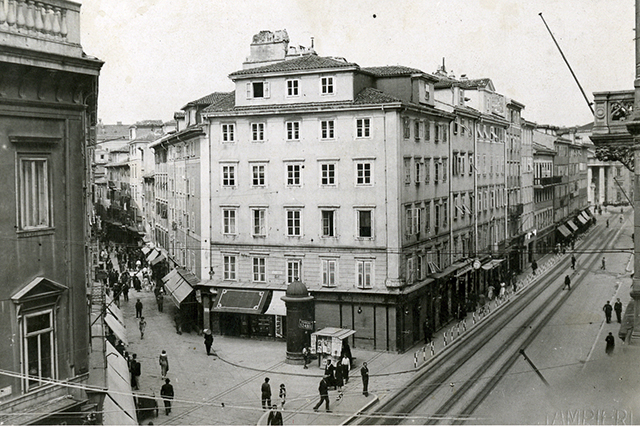 In 1888 Saba and his mother moved in with one of her sisters, aunt Regina, first in via degli Artisti 7 and in 1891 in piazzetta San Giacomo, first at number 3 and later at number 1.
In his poem Dedica a mia zia Regina (To my aunt Regina), 1921, Saba describes his love for this aunt, in spite of her “acute passion for economy and thrift”. Aunt Regina was the only person who showed enthusiasm when reading his poetry and his early short stories and concern for his education. It was thanks to her that in 1903 Saba could study in Pisa. When she died, she left him 100,000 crowns.

Often, so as to make my way home
I take a dark street in the old town.
Here and there the lamplight glitters
yellow in the occasional puddle, and the street is crowded

Saba met his future wife Carolina Wölfler, who lived in via delle Acque 18 (today via Ruggero Timeus 12), in 1904 when one of her cousins introduced her to him. They would not meet again until 1907-1908, after Saba completed his military service. At the time Carolina and her family lived in via Domenico Rossetti, 28 (today 24). Saba, who knew the street where she lived but not the exact number, was walking walk up and down via Rossetti in the hope of seeing her when she appeared at the window to water a vase of geraniums.

On 28 February 1909 Umberto Saba took Carolina Wölfler as his wife in the Jewish Temple known as Scuola Vivante, today the seat of the Carlo and Vera Wagner Museum near the ancient Jewish Cemetery at the foot of the hill of San Giusto. In that same year the Jewish remains buried here were ordered to be transferred to the new cemetery in via della Pace since the area was expropriated by the local government to be converted into the Park of Remembrance (Parco della Rimembranza).

In Trieste where there are many sadnesses,
and beauties of sky and country road,
there is a step climb called Via del Monte.
It begins with a synagogue,
and it ends at a cloister.

Via Chiozza, 56
today via Francesco Crispi, 56 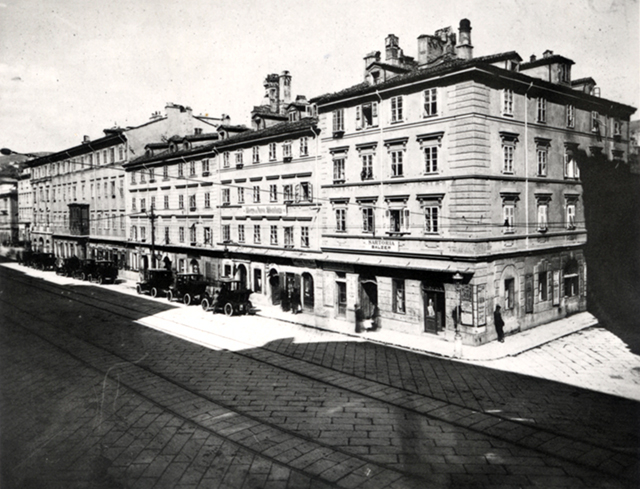 The first house where Saba and his wife Lina lived was located in the countryside near Montebello in Strada di Fiume, probably around number 141.
As Saba himself noted, it was here that he composed A mia moglie (To my wife).
In February 1919, at the end of the war, Saba was discharged from the army and he returned to Trieste, where he moved to via Chiozza, 56 on the second and later the fourth floor.

Saba had always lived on a private income, but after the war, when Trieste became Italian, the bequeath left by his aunt Regina was no longer enough. Thus in 1919, before opening the antique bookshop, Saba worked for several months at the “Italia” Cinema – Theater managed by his brother-in-law Enrico Wölfler. Here he wrote promotional texts to advertise films.

I love the Sunday crowd here,
that erupts onto itself, and if only
they can find a seat, they sit in admiration to enjoy
a little American optimism. 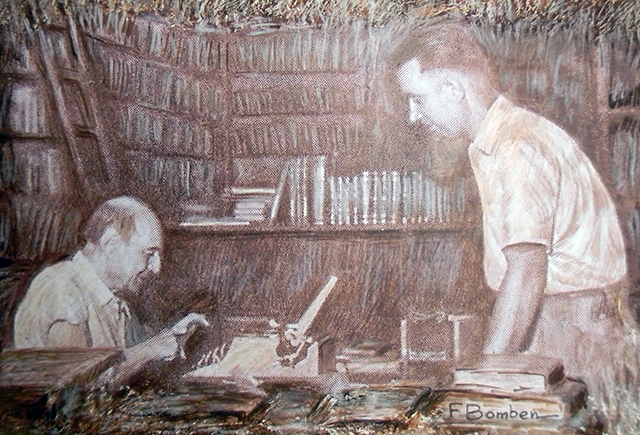 In September 1919 Saba and his friend Giorgio Fano bought for 4,000 liras the second-hand bookshop of Giuseppe Mayländer. Initially they intended to clear the place and sell it to make a profit, but Saba was so deeply fascinated by those old books (more than 28,000) that he talked his friend into reopening as an Antique Bookshop. Saba would work here for more than thirty-five years: in Primavera d’Antiquario (Springtime of an Antique Dealer), 1926, he declared himself to be the “custodian of the noble dead”.
During the Second World War the racial laws forced him to pretend that he had sold his business to Carlo Cerne, his employee since 1924, who would remain his business partner with a fifty percent stake. After Saba’s death, Cerne continued to work at the bookshop that he left to his son Mario, who continues to manage the shop to this day.

I used to have a lovely city set between craggy
mountains and the luminous sea. Mine
because I was born there, more mine than others’
for I discovered It as a boy, and when I grew up
I married it to Italy for ever with my song.
One had to live. And for that
I chose the most dignified of maladies: it was the discreet
little antiquarian bookshop.
The inept Fascist, the guzzling German,
took everything away from me. 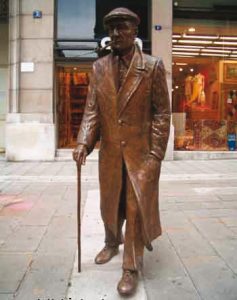 In 2004 a bronze statue by Nino Spagnoli was erected at the corner of via Dante and via San Nicolò. It portrays Saba walking towards his beloved bookshop. The pipe between his lips – that had been a staple throughout his life – was repeatedly stolen and it was eventually decided not to replace it.

The dairy in front of the bookshop was Saba’s favorite place for a break. He could be found at Walter’s several times a day and visitors would stop by and chat with him at the table in the front, near the shop window.
At times, when Saba was composing poetry and needed concentration, Carlo Cerne had to leave the bookshop and stayed at Walter’s until the poet had finished. 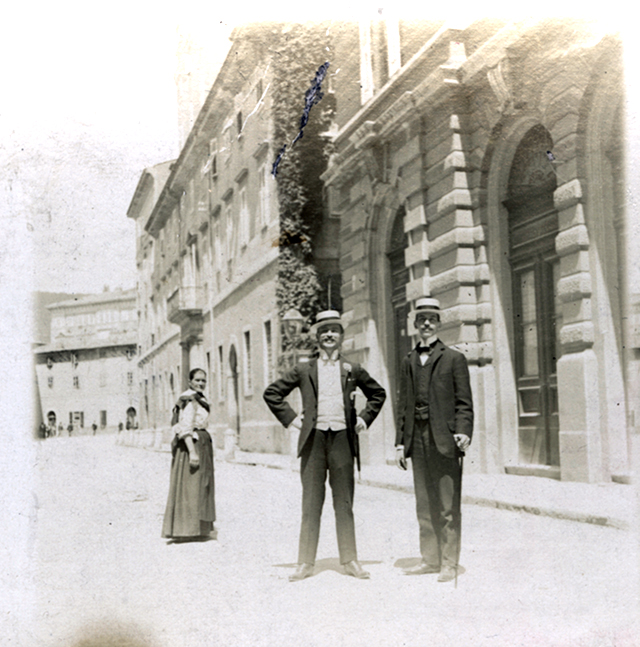 Between 1929 and 1931 Saba was treated by Edoardo Weiss, a doctor born in Trieste who introduced Sigmund Freud’s psychoanalytic theory to Italy. Saba stated that meeting Weiss marked the beginning of a new chapter in his life, when he finally realized the important role played in his life by the wet nurse, whom he contacted and visited frequently.

A child’s cry
rings out in the stairwell. a woman, leaving,
also weeps. and in that moment someone’s
heart is broken for all time.
Forty years
have passed since then.
The child
is now a man,
almost an old man, and versed
in many thing, both good and bad.
That child
is Umberto Saba.
And, in search of peace of mind,
he’s gone to talk with his wet nurse.
She too, on leaving him, felt bad or worse
than he, and did not leave him voluntarily. 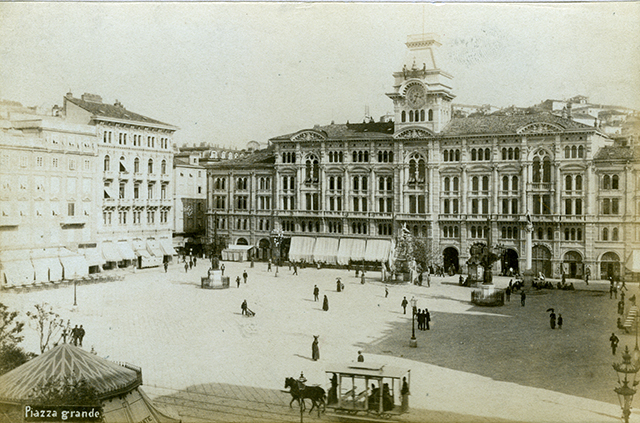 Since 1905 Saba and his friends would meet at Caffè Municipio in Piazza Grande. Here Saba met Silvio Benco, a writer, journalist and critic for the local daily “Piccolo”, who read his poems and immediately understood the originality of Saba’s work and the main themes of his poetics.
After the First World War the café was renamed Caffè Garibaldi and others joined the intellectuals who were regulars there, including the writers Svevo, Joyce, Quarantotti Gambini, Stuparich and the poet Virgilio Giotti. 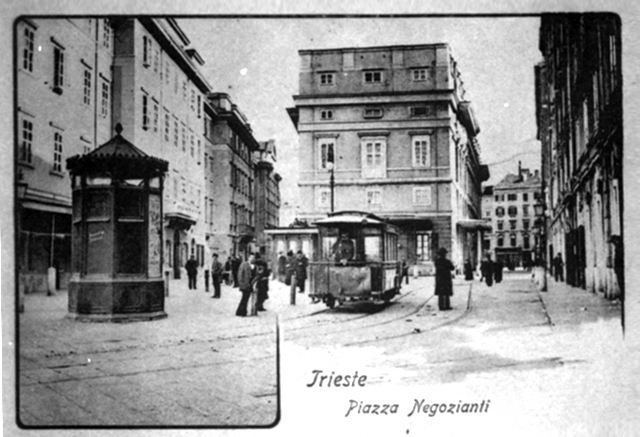 Caffè Tommaseo is one of most ancient and prestigious cafés in Trieste. It was one of the first to use gas lighting and the first to serve ice-cream. Saba himself, in a letter to his friend Nora Baldi dated 21 December 1953, recalls: “I have eaten the most delicious pistachio ice-creams, that I am afraid are found nowhere else in the vast world.” The café was the meeting place of an active group of intellectuals from Trieste’s middle class, as well as actors and singers working in the nearby Teatro Comunale (today Teatro Verdi).

You see, my heart, after so many
years spent outside of that old dream,
I now return to Caffè dei Negozianti.