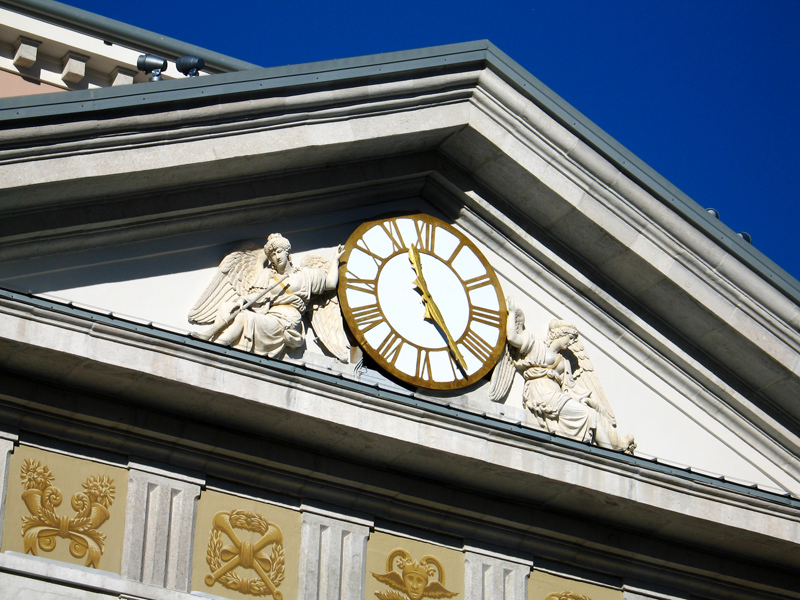 At the end of the eighteenth century was necessary a decent base for the meetings of the Stock. The Academy of Arts of Parma selects those by Antonio Mollari from Macerata. The building starts in 1802 and opened the 6th of September 1806. In 1844 the Stock was transferred to the Palace of Tergesteo, while the old palace becomes the base of the Chamber of Commerce. The principle prospect on the square of the Stock, reminds a Greek temple, with the Doric columns, with metopes. In the niches low ground, stand Asia, Africa, America, and Europe, colossal statues, with a compact installation and a solid structure. Other two sculptures first-floor, Vulcan and Mercury. Above, on the balustrade of the faÁade, we can see, from left to right: Danube, the Genius of Trieste, Minerva and Neptune. 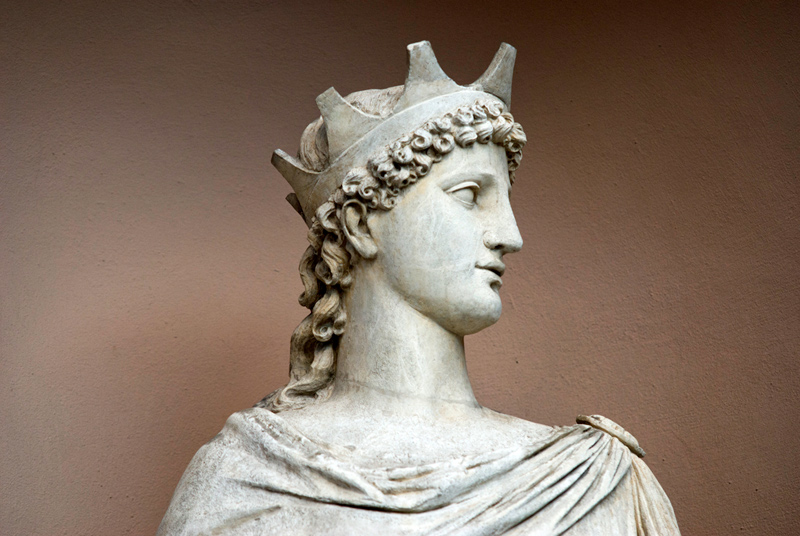 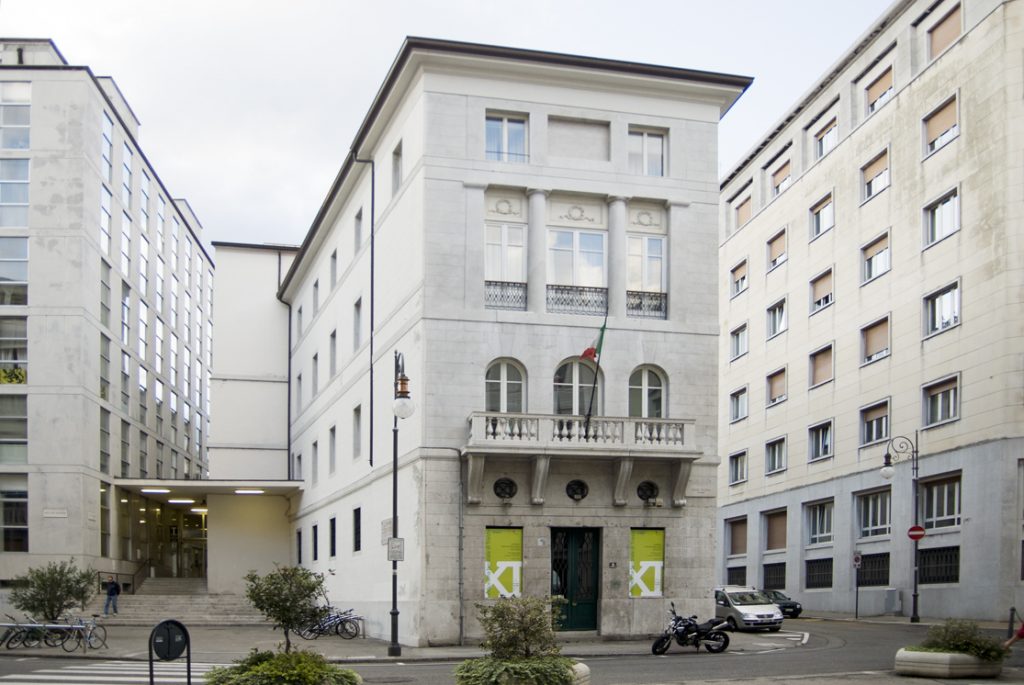 The Costanzi family committees to Pietro Nobile a project for an holding from the mid-ë700. In 1840 another landowner, Daniele Caroli, the following year committees to the architect Valentino Valle to add a part of the building to the part already existing from 1817 using the same model. The facades to Piazza Piccola and at the two extremities of the building to della Muda Vecchia street present first-floor three simple openings each side, surmounted by three ocular windows memories of Palladio. First-floor a balcony with three arch portals on an ashlar wall surface; second-floor three windows surmounted by a bas-relief and flanked by two Doric columns with capital, top-floor a row of additional windows. The rest of the building shows six Doric pilasters, a series of windows and below another series of full centre openings. 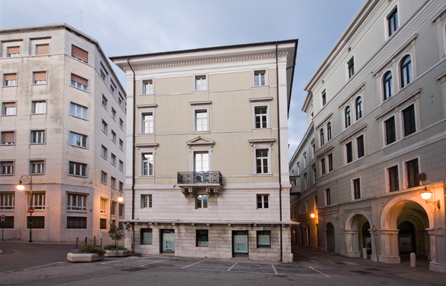 Erected,  in 1804 the architect  is anonymous. The building, propriety of MariaTeresa Civrani and her husband Carlo Leopoldo Eisner, was inherited by their sons, that in 1850 sold it to the Polacco family. The building stays compact on a basement covered with white stone segments, interrupted, mid-air, by a shed sticking out, sustained by an artificial stone brims. On the side of Procureria street a big portal, is surmounted by large and rich consoles that support a balcony with wrought-iron balustrade. The facade presents horizontally the string courses following the various orders, connecting the windowsills of the openings and creating a very compact effect in the shapes almost ìhugî of the wall complex. 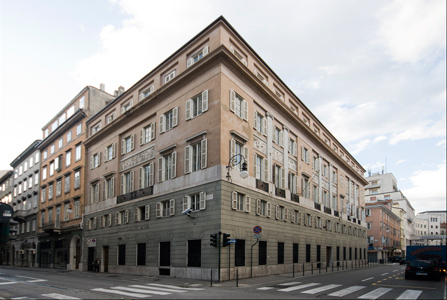 Committed by Giovanni Battista Pitteri, was purchased by Carlo díOttavio Fontana, rich exponent of the economical life in Trieste. That in 1808, he made a hotel. The general settlement, realized with elegant majesty, manifests characteristics very close to the language used by Matteo Pertsch.

The principle faÁade presents the insertion of panels in relief, interrupted by the intersection of the pilasters and the development of an high basement in which is inserted the first floor, with the consequent connotation distinctive of the second floor. The prospectus develops in its width with three decorative groups, individuated by the mirrors curving inwards decorated with bas-reliefs and Ionic smooth giant order pilasters.  The bas-reliefs have been carved around 1808 by Antonio Bos. 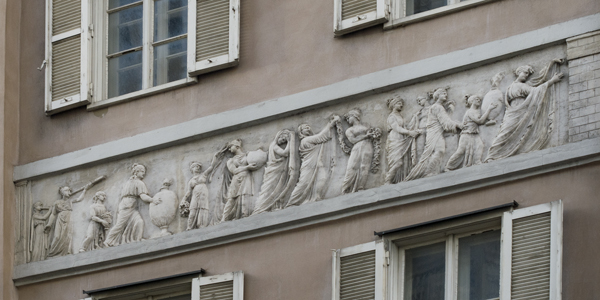 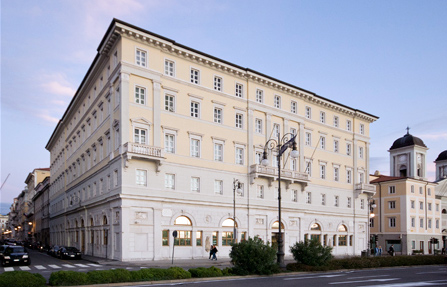 The Metternich Hotel, then called Hotel de la Ville, today base of Fincantieri, was for many years the most important of the city. Projected by Giovanni Degasperi, presents nevertheless some compositional restlessness in the picture and in the construction of the architectonical order.
The facade is divided in five parts, one central and two laterals, composed respectively by four and two pilasters in giant order with Corinthian capitals and two intermediate without columns with windows with lintels supported on brackets downstairs and simples upstairs.

The ashlar facade ground-floor presents strong eclectic tensions. A gravestone on the left of the facade reminds that in 1850 Giuseppe Verdi composed the Stiffelio symphony went on stage, for the premiere, at the Theatre Comunale the 16th of November of the same year. 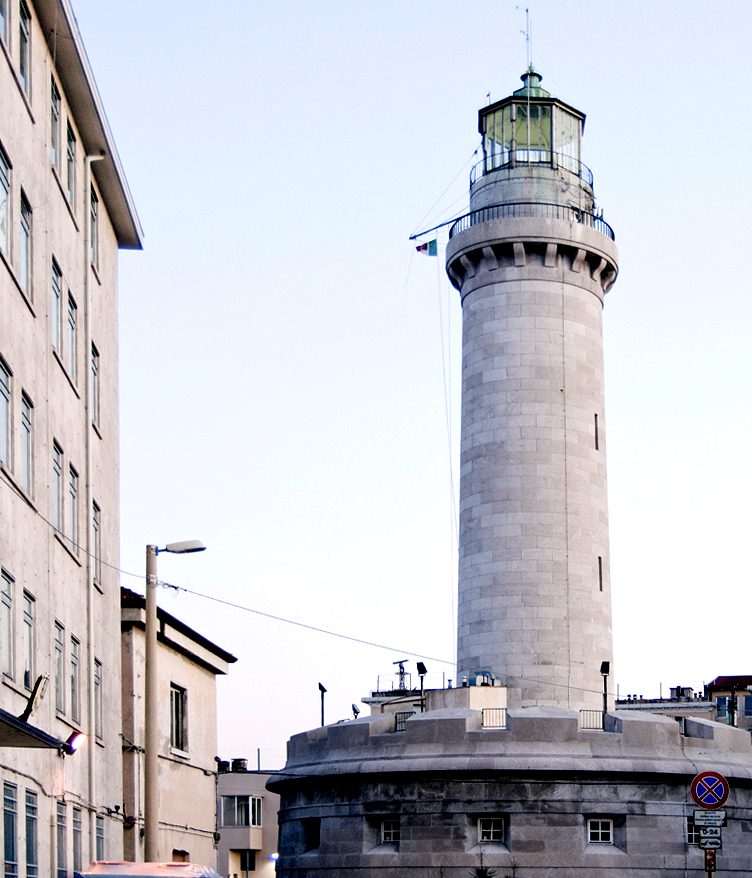 The story tied to the realization of this lighthouse was very troubled. Finally in 1831 Matteo Pertsch, managed to find the approvals for the projects. The Lantern began to work the 12th of February 1883.

The lighthouse has the shape of a column slightly tapered upwards. It comes from a truncated cone structure with a circumference of 60 metres, belonged to a pentagonal pre-existing bastion, that was modified and adapted for its new function as basement, with sixteen squared windows, framed in chalky stone from Aurisina The shaft terminates with big stone consoles, supporting a small balcony that conducts to the light equipment.
The Lantern worked oil-fired until 1860, when it passed to petroleum. Already in 1833 the length of the beam was considerable (16 nautical maritime), was replaced in its primary function in 1927 by the new Lighthouse of the Victory . It continued to emit the signal until 1969, when it was definitely switched off. Today is the base of the Naval League. 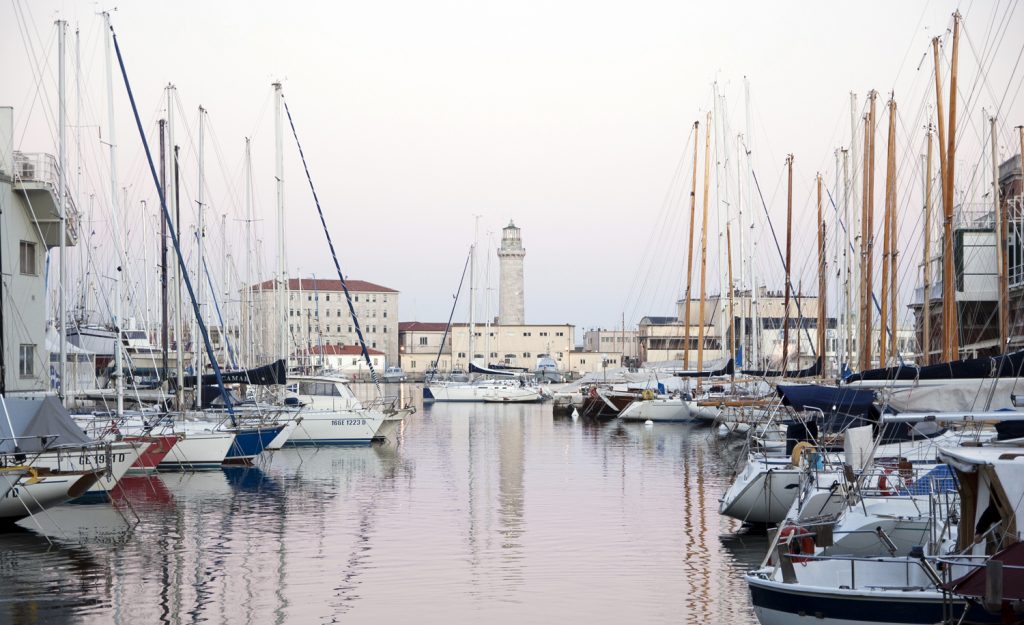 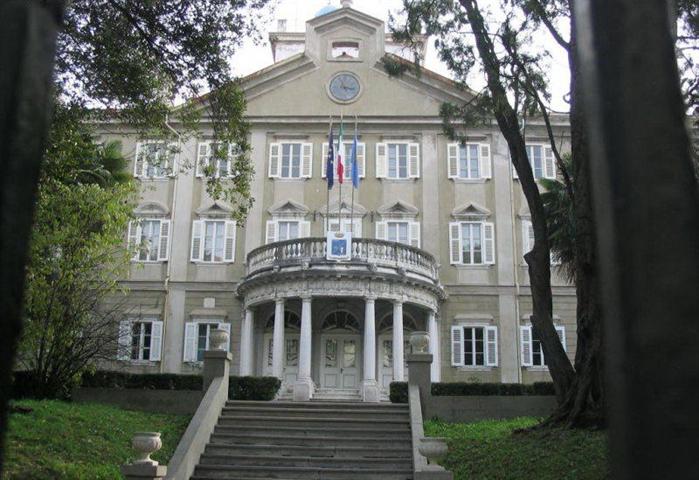 In his propriety on the hill of the Saints Martyrs the trader Antonio Strohlendorf built a country house called ìAnonymousî. In 1790 the estate was purchased by the count Cassis Faraone, rich merchant of Egyptian origins, who enlarged and embellished the building in its interior and exterior: he decorated the residence with statues, water games, a beautiful garden, and a splendid orange grove. In 1748 the French architect Champion gives the definitive configuration to Necker mansion.
The residence has been refuge of the Napoleonians in exile, haunt of the high society and the culture not only from Trieste, but European in the first half of the nineteenth century. The building announces the neoclassic .

Building attributed to the architect Matteo Pertsch, but in the local archives doesnít exist the original project of Pertsch. Are instead documented enlargement interventions by De Puppi (1831) and Buttazzoni (1832-33). In projecting Rotonda disposed of a fragmentary urban fabric, irregular close to the walled city. Pertsch designs on the acute angle of the lot a semi-circular of the temple with giant order and ionic capitals that can be read also as a bent faÁade of a prostyle temple. The giant order sustains a very thick cornice. The columns are placed on the wall in which are carved out three window-doors balustrade between the basements of the columns, and in the superior part, the high-relieves represent the scenes of Greek-roman inspiration, with evident didactic intentions (Coriolano, Lucrezia, The Sacrifice of Iphigenia). 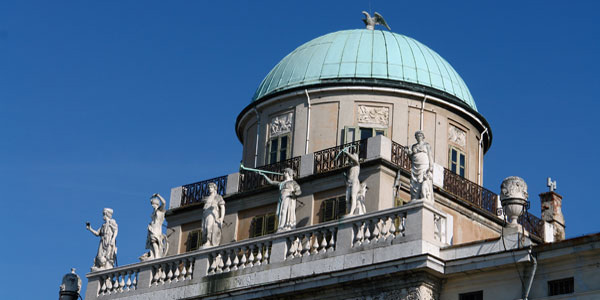 Built by the Greek trader Demetrio Carciotti, in Trieste from 1775, was designed by the architect Matteo Pertsch. The palace, impressive dimension, is long 100 metres and large 40, and comprehended the residence of the owner, noble floor to the sea, sixteen houses in the superior floors and ground-floor stables, shreds, and eighteen warehouses,. In 1831 the building became the first base of the General Insurances. Today is propriety of the township. The principle faÁade presents an ashlar base on which stay the giant order columns, only in the central part of the faÁade of the building the basement of the columns is pressed against the wall.

The building is completed by a cupola surmounted by the Napoleonic eagle. Eight of the ten statues that ornate the facade are made by the sculptor Antonio Bosa: Portenus (the guardian of the roman port), Thyke (protector of the merchants and sailors), Atena (protector of the weaving, reminds that the owner was a textile merchant), the Fame (dispenser of good and bad news), Apollo (god of the harmony and the order), Abundantia (with allusion to the luxury of the merchant that with risk and work, give advantage also to the city). 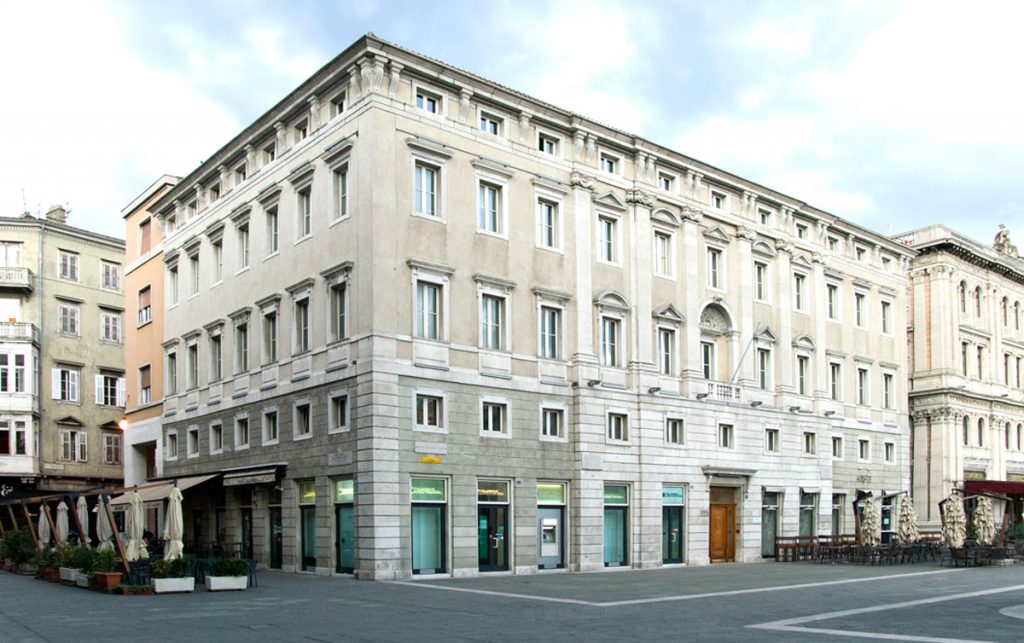 Built in 1780 by the merchant Domenico Moro Ulderico Plenary is an imponent building, which places the interpretation of the neoclassical Trieste a composite key of its various phases and leads. The tripartite faÁade consists of a single central order consists of six pilasters with Ionic capitals and resting on a stylobate. The smooth ashlar is designed to be simple horizontal bands. The decor is simple and localized. It ‘a clear example of cross contamination between different style and syntax: the central exedra with late baroque decorations; late Rococo frames of square windows at the top of the stylobate and the corbels supporting the roof and closure of the facade. 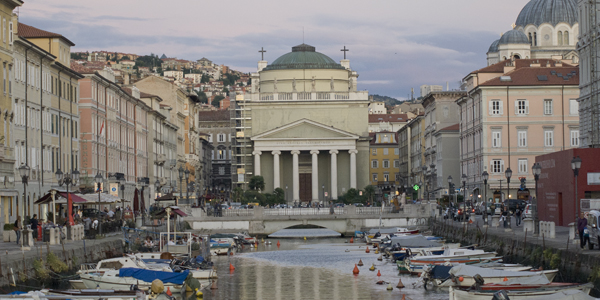 The Church of Saint Anthony the Thaumaturg is commonly called St. Antonio Nuovo because it replaces an older church by the same name, going back to the second half of the 18th century.

It was built between 1825 and 1849 on a project by architect Pietro Nobile. The facade is characterized by an imposing pronaos with six ionic columns and a wide pediment; on the penthouse there are six statues carved in 1842 by Francesco Bosa, representing the patron Saints of Trieste: Justus, Sergio, Servolo, Mauro, Eufemia and Tecla. The rear facade is surmounted by a couple of twin bell-towers. The interior is striking for its wide space marked by the slow and calm rhythm of arches, barrel vaults and cross vaults, a rhythm that culminates in the central dome. The painting of the main altar, made by Nobile, is surmounted by an aedicule with small Corinthian columns and a dome. 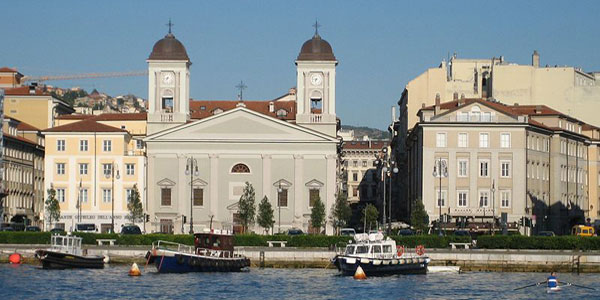 The temple, dedicated to Saint Nicolò and to the Most Holy Trinity, was built on the Shores. At that time Trieste was a prosperous emporium and every year thousands of ships from the East used to land there, where the Saint is extremely venerated. Saint Nicola, besides, is the patron of sailors, ship owners and in general of all those who work with sea trade. The church, built in the shape of a basilica with a single nave, was opened in 1787.
As soon as you go in, you immediately notice the wooden iconostasis shining with golden carvings and paintings with a golden background; over the knockers of the three doors the Saints Peter and Paul are portrayed, together with other Church Fathers. In the upper part there are 21 tempera paintings on wood with a golden background, depicting scenes from the Gospel. In the lower part there are 8 icons with silver sheeting. On the side walls there are two huge paintings by Cesare dell’Acqua. 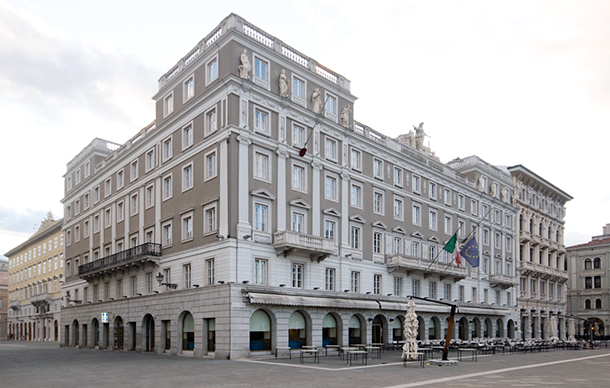 In 1839 merchant Nicolò Stratti built in Piazza Grande, in front of Palazzo Pitteri, a palace that could emulate the one built by Carciotti. The original project by Antonio Buttazzoni was modified afterwards by Andrea Seu, and then by Eugenio Geiringer and Giovanni Righetti,  and in 1872 Eugenio Geiringer and Domenico Righetti restored the faÁade transforming it dramatically in order for Palazzo Stratti to adapt to the new look of Piazza Grande.

The restoration was radical, both for the transformation of preexisting elements and for the addition ex-novo of a series of ornamental motives some floral friezes and festoons were added, together with four statues on the right and four on the left between the windows of the raisings, portraying some classical gods, thus giving the palace a fully eclectic look. A curious detail, on the right of the spectator, the group of sculptures (Luigi Zandomeneghi) the locomotive that Stephenson gave to Austria in 1837, while the owl on the left is Minervaís sacred bird. 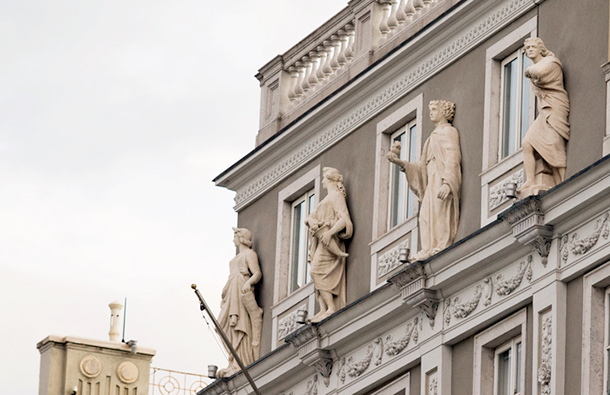 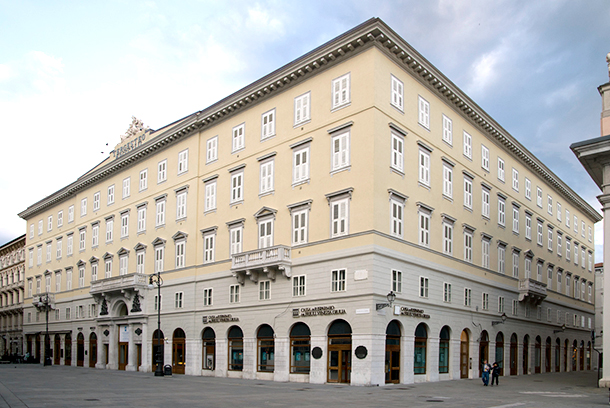 Built (1840 – 1842) on a project by Francesco Bruyn, from the will of Societ‡ del Tergesteo, with the aim to serve as a place for commerce and a meeting point for the inhabitants. The main facades, identical, are pretty uniform above the smooth ashlar base including the ground floor and the mezzanine. The group of statues on the faÁade overlooking Piazza della Borsa was made by Pietro Zandomeneghi. At the center there is the goddess of the sea, Thetis (Trieste), standing on a seashell dragged by four horses coming out of the waves. On the right there is Mercury, the god of commerci. On the rear faÁade toward Teatro Verdi there is a group of sculptures made by Antonio Bianchi: Neptune is at the center, Mercury stands beside him and, on the sides, the allegories of geography and history. 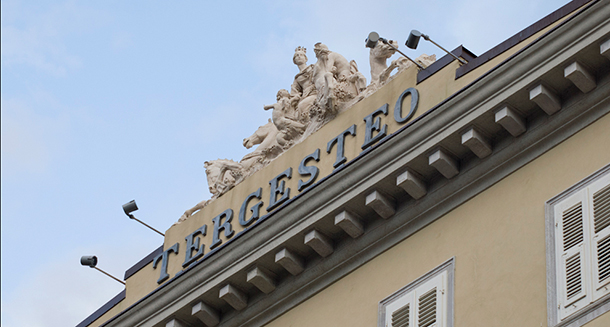